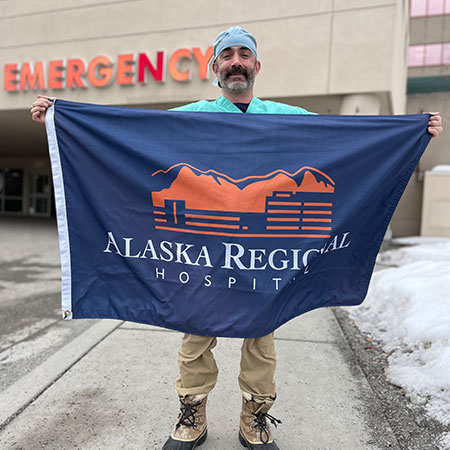 At 9:00pm on March 17, one of Matt Paveglio’s lifelong dreams finally became a reality: he finished The Iditarod Trail Sled Dog race across the State of Alaska.

“I knew – every step of the way – what I was going through was not nearly as tough as what, you know, half the patients I’ve taken care of was," our Alaska Regional Hospital Emergency Department Registered Nurse explained during an interview at The Iditarod 2022 finish line.

Matt spent 11 days, 6 hours, 0 minutes and 56 seconds mushing with his dog team over two mountain ranges and through monotonous, flat tundra, along the frozen Yukon River and Bering Sea to the western Alaskan coastline. In all, he made it through all 23 checkpoints along the nearly 1,000-mile long trail.

To celebrate St. Patrick's Day, Matt made his entrance into Nome wearing a green tutu over all of his winter gear. He was sure to avoid any pinching as he made his first trip down Front Street.

The Iditarod 2022 officially wrapped up with the awards banquet on Sunday, March 20 in Nome, Alaska.

Mushers took to the stage when their name was called. At that time, Matt addressed the crowd, “Wow! From a fan to a volunteer, to a musher, it’s been an awesome journey. Big thanks to all the volunteers, of course, the judges, the villages, the pilots, especially the veterinary staff...”

He continued, “From a rookie looking in, it just couldn’t have gotten better, [in] my opinion.”

Matt publicly thanked his wife and daughter – a Jr. Iditarod finisher – for their constant love and support, along with his dogs and Kathleen Frederick, the owner and manager at Shameless Huskies Kennel.

The 2022 Iditarod began on March 6 in Willow, Alaska, north of Anchorage, with more than 10 additional mushers than started the race. Twelve mushers scratched and could not make it to Nome.

Seven-time Iditarod veteran, Brent Sass, and his 11-dog sled team, were first to Nome in the early morning hours of March 15 and won the 2022 Iditarod race. It was Sass’s first Iditarod victory.

Before the 2022 Iditarod, 820 individual mushers had completed the race. That number is now more than 850.

Colorectal Cancer Awareness Month: When should...

March 21, 2022 by Bana Jobe
Colorectal cancer has gone through a rebranding campaign over the past few years thanks to awareness efforts not just during Colorectal Cancer...
Next Post
Back to blog home

8 common men's health issues to watch out for